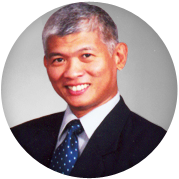 Professor of Law
University of the East

Siegfred is the Firm’s estate planning and commercial law expert having earned both theoretical knowledge and practical experience in these fields of the law, both here and abroad. He has authored a textbook “Wills and Succession”, taken up subjects regarding “Gifts, Wills and Trusts” and other laws pertinent to estate planning. Siegfred went into active legal practice after having been military officer of the Armed Forces of the Philippines (AFP) from 1987 up to 1999. His stint in the Army does not only include his participation in counterinsurgency operations in the provinces of Samar and Bataan but also substantial exposure in the field of security and intelligence. As a lawyer in the Army, he was detailed with the AFP Retirement and Separation Benefits System (RSBS), the military pension fund, where he worked in the Litigation Division of the Legal Department and concurrently served as the Corporate Secretary of various RSBS affiliates.Siegfred’s other professional achievements include being appointed as the first Executive Director of the University of the East Legal Aid Clinic, having served as a Resource Speaker for UNICEF-sponsored seminars regarding small community justice and child’s rights, and having worked as an in-house counsel of one of the leading software development companies in the United States.

He is admitted to the State Bar of California and to the Illinois State Bar (Limited).