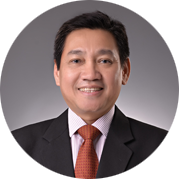 University of the Philippines, QC
Bachelor of Laws (LL.B.), 1996

Bestselling Author,
12 Little Things Every Filipino Can Do
To Help Our Country, 2005

Alex’s primary legal works are in the fields of foreign investments, corporate law, environment, and local government units. Around 60% of his clients are foreign companies and investors from different countries.

He also served previously as legal consultant of the United Nations Development Program (UNDP) in the Philippines for several years.

Alex began his legal work early when, as a working student during his law school years, he worked in the House of Representatives of the Philippines for different legislators. He drafted House Bills and Resolutions, some of which became laws. As a working student in law school, Alex also had the privilege to write the first drafts of the two (2) chapters of the Final Report to the President of the Philippines of the Fact-Finding Commission, an investigative body tasked by then Philippine President Corazon Aquino to determine the root causes of the series of coup d’etat in the country. The body was chaired by Hilario Davide who later became the Chief Justice of the Supreme Court of the Philippines.

After graduating from law school, Alex joined the law firm of Platon Martinez Flores San Pedro & Leano, where he was exposed to the intricacies of the legal practice, particularly in the fields of foreign investments, corporate law, commercial litigation, and immigration.

He eventually co-founded PESALAM Law which later morphed into the present MALCOLM Law, where he continues to serve many corporate clients, particularly foreign investors.

While practicing law, Alex also wrote as a columnist in the country’s biggest business newspaper, BusinessWorld, where he discussed business and economic related legal issues for seven (7) years until 2004.

But while Alex is a lawyer by profession, his first passion is writing books for the country.

In 2005, in his desire to help the country, Alex wrote the book entitled “12 Little Things Every Filipino Can Do To Help Our Country”, which to his pleasant surprise became a national bestseller.

Since then Alex has written several more books that promote love for our country and good citizenship.

In 2008, he also wrote the poem “I am Filipino” which hopes to develop a positive, developmental, unifying and solution-seeking identity for the Filipino youth. The poem is now being memorized by many elementary and high school students in many parts of the country.

Alex is also involved in good governance advocacy. He is past president & CEO of ISA (Institute of Solidarity Asia), a public governance institute that runs good governance & development programs in several LGUs and national government agencies like the AFP, PNP, Department of National Defense, Board of Investments, among others.

Alex is married to a beautiful wife, and has four wonderful children.